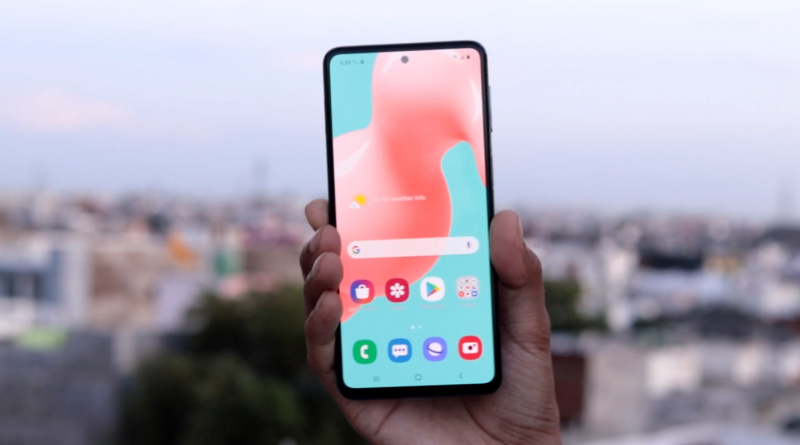 The phone offers a premium feel for viewing and using. Finishing is superb. Fingerprints fall very easily. The display is also very smooth. The body of the phone is plastic.

Talking about the design of the Galaxy M31s, its design is very much like the Galaxy A31. There is a slight change in the placement and notch of the flash light in the camera setup. This phone has a punchhole display. There is a center front camera at the top of the display.

The fingerprint sensor is given in the power button and the volume buttons are given in the right side. Even after having a large display, there is no problem in accessing the power or volume buttons. At the bottom is a single speaker, USB Type-C charging port and 3.5mm headphone. The camera design of the Galaxy M31s is similar to the design of other Samsung phones.

This Samsung phone has a quad camera setup. It has a primary sensor of 64 megapixels, which has an aperture f / 1.8. On the other hand, the phone has a 12 megapixel ultra wide angle lens that covers 123 degrees. The phone has a 5 megapixel macro lens and a 5 megapixel depth sensor. For selfie, you will get 32 ​​megapixel sensor.

The phone has features like Made for India feature Single Take, Slow Motion, Hyperlaps, Live Focus. Apart from this, it has Pro Mode which is manual. The phone’s camera uses a 16-megapixel lens by default, although you can select a 64-megapixel lens according to your needs.

The camera features 10X zoom and group selfie. The Galaxy M31s is capable of video recording and features with both rear and selfie lenses.

In adequate lighting, the camera specializes in clicking photos with real color and detail. There is a lack of detail in wide angle shots. Portrait mode is great. There is a lack of colors in portrait mode of selfie. The subject does not blur. The selfie is good, but the front camera struggles a lot in the light of the room and the low light. The phone also has video stabilization which is fine.

The Galaxy M31s has an Exynos 9611 processor and has up to 8GB of RAM option. This phone has Android 10 based OneUI.

There is no issue of lag or hang in the phone. If the habit is of high refresh rate then you may feel this slow, otherwise the phone will run at its own speed and there will be no obstruction.

The performance of the phone is also tested through many benchmark applications. But sometimes you do not know the reality from the benchmark test. However, when it comes to gaming, you will be able to play any kind of mobile game comfortably without any lag in it.

After continuous gaming, the phone is a little sure. There is no problem even in multi-tasking. Switches from one app to another can also be faster. Loading time is short.

Bad Things- This Phone is Not For Hardcore Gaming Even When You Play High End Game Like Pubg,COD than You Face Lagging & Heating problem.